You are here: Home / Crafts / Costumes / Easy Children’s Costumes in a Flash

Halloween is by far one of my favorite holidays. When I was young, store-bought costumes were both expensive and cheaply made. While that has changed some, I find so much joy in sharing the creation process with my little man and helping him craft the perfect costume based on the image in his mind. Not every costume has to break the bank or require loads of time. Our costumes were created using items I already owned! 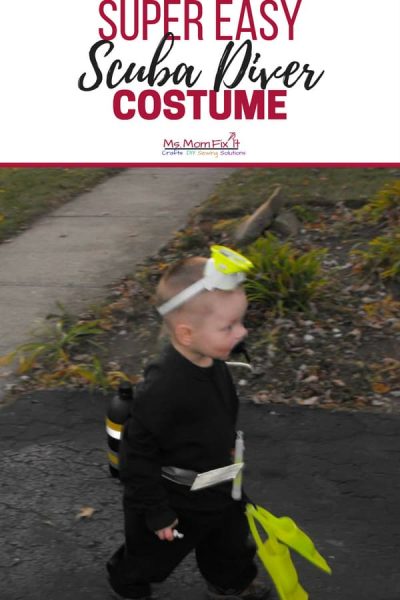 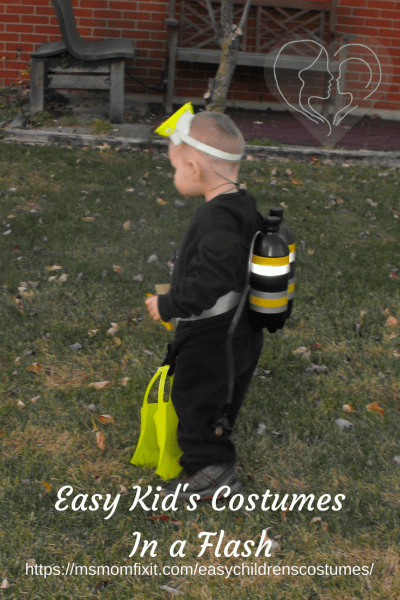 This started with a picture in a magazine which I have long since tossed. I apologize if I am unable to give credit here where it is due. This was our first Halloween where my little man could walk. He was not quite 2 years old.

The beginning piece is your scuba tanks. You will need 2 soda bottles to spray paint. Use the size that best fits your child’s size. Here we used 1-liter water bottles.

You will then spray paint the bottles. To do this I put wood dowel rods in the ground and inserted them into the bottles so that the bottle itself was upside-down resting on the stick. Spray with a nice even coat and let dry. Don’t forget to also spray paint your bottle lids!

Next, tape the bottles together with duct tape. Once the bottles were secure, I then created a belt out of the duct tape by measuring out 2 equal length strips. These strips were then put sticky sides together.

Next, I chose to get a bit more creative by using some yellow and white reflective electrical tape. Since the costume was black, I wanted to make sure that my child would be seen by people in cars!

To complete the belt, I bought some sticky back Velcro pieces and adhered them to the duct tape on both ends so that it could be joined together. I added a buckle to the belt by using the Velcro to affix a piece of cardboard covered with more reflective electrical tape. Now he’d be seen front and back!

I chose to accessorize this costume with flippers, a mask, lantern, and beach bag. Oddly, we already owned all of these items!

The hardest part of this endeavor was figuring out how to incorporate the pacifier that could not be left behind. Thus, the pacifier was covered with electrical tape on the front only. I then attached a small length of aquarium airline tubing to the pacifier front with the electrical tape. Lastly, attached the other end of the line to one of the water bottle lids. 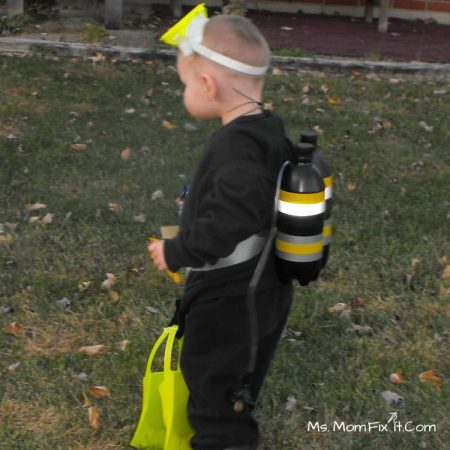 The only thing I purchased new was the reflective electrical tape which I considered to be a must for safety.

My little man received a ton of compliments and he had a blast!